How to file Nil TDS return on TDSCPC website?

How to file Nil TDS return on TDSCPC website?

If you are a tax deductor and making payment time to time of TDS then you must need to file TDS return.

As the name suggests, Tax deducted at source, it is the tax which is deducted or subtracted from the income at the source from where income was generated. The tax so collected at source is directly contributed to the government’s revenue on behalf of the taxpayer or income generator. So, the TDS on the earnings of individuals and businesses become one of the sources of government revenue and this is the reason why the provisions of TDS plays an important role for government.

The Income Tax Act, 1961 by the Central Board of Direct Taxes (CBDT) controls and governs the rules and regulations of TDS. Tax Deducted at Source applies to both kinds of income – Regular income as well as Occasional or Irregular income. So, we can say that TDS is deducted from various incomes such as Salary, Commission, Rent, Professional Fees and Interest. However, TDS is not confined to just these incomes.

The responsibility of deducting the TDS lays on the shoulders of the TDS deductor that is the employer or the payee. The payee or the employer owns an obligation to deduct the tax before paying the salary or income to the receiver or employer. Here is a brief list of individuals who are TDS Deductors (who are liable to deduct TDS) under the Taxation Rules.

TDS It is to be noted that TDS can be deducted only from the earnings which imply that this TDS liability sprouts out only in the case of earnings or income. TDS is deducted ahead making payment and is taken from the payments which are made in cash, cheque or credit. The amount so collected under TDS is deposited in government revenue through different government agencies. The provision of TDS holds benefits for the government as well as the individual on behalf of whom TDS has been paid. Now, let’s have a look at the benefits of paying TDS for the government.

TDS collection is a constant source of revenue for the government.

TDS is deducted at various rates based on nature and the amount of income earned. Different TDS rate applies to different kinds of income. The tax has to be paid on the extra amount earned above a certain maximum threshold which is tax-exempt. TDS rate varies from 1 percent to 30 percent on different types of payments including salaries, commissions, professional fees, interest earned, rent, etc. Read Also: TDS Online Payment Procedure, Due dates, and Forms: Ultimate Guide Method of TDS deduction TDS is deducted by the deductor from the payment made to the receiver at a certain fixed rate applicable to that particular type and source of income. Deductor is liable to deduct the TDS and further deposit it to the government. For instance, when the employer pays a salary to the employee, the employer plays the role of deductor and the employee becomes the TDS deducted.

To File NIL TDS return go to https://contents.tdscpc.gov.in/ and login.
After login you need to navigate to Statements / Payments - Declaration of Non Filing of TDS return sees below image: 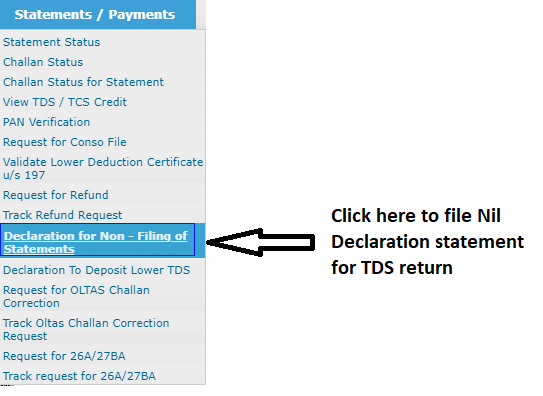 After clicking on the above link, you can navigate to the page where system asks you to select the relevant quarter, year, Form Type and Reason for non-filing of TDS return.
Select details for which you want to file Nil TDS return and reason for the same.
It's done!
Your nil tds return filing is done, save the acknowledgement appear on the screen for your reference.
By Tally Knowledge On 14:22:00
Email ThisBlogThis!Share to TwitterShare to FacebookShare to Pinterest
Tags: Tax Deducted at Source

No spam allowed ,please do not waste your time by posting unnecessary comment Like, ads of other site etc.

Subscribe Free Newsletter to get latest Tally Tutorials into your inbox.